From The Hometown News:

In January of this year, the Westchester Streetscape Improvement Association (WSIA) completed the removal of trees along the west side of Sepulveda as part of its Westchester Landscape Entry project. The 50-plus-year-old Ficus trees and their massive roots, many of which were diseased or structurally unstable, had made sidewalk repair impossible and impractical. While pedestrians walking the stretch of Sepulveda between Manchester and 80th street were fully aware of the extent of the crumbling sidewalks, with the massive trees now gone, the sidewalks are painfully visible to anyone traveling down Sepulveda creating a massive eyesore….

While the project was slated to begin in March or April of this year, eight months after the trees were taken down, however, the project remains on hold. According to WSIA president John Ruhlen, the city’s Bureau of Engineering, which is overseeing the project, has now rescheduled two or three times and the project is now tentatively scheduled to begin….

We weren’t familiar with the Westchester Streetscape Improvement Association before we read the Hometown News article. In doing a little research, we discovered that they have quite a detailed website. The website is a great resource, but also kind of puts those folks on the hook for a little accountability, right? 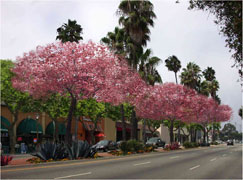 This is promised “after” picture look great. What’s the updated ETA, you might ask? Well a little friendly competition has come to town that might just nudge this project along.

According to the HTN article, Caltrans is coming in and replacing trees on the other side of the street as part of the Safe Routes for Schools program.

Maybe that’ll get some things moving?

State or City first? Who’s your money on?