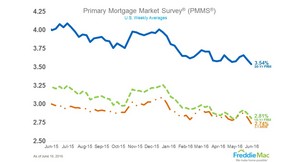 For the second consecutive week mortgage rates moved lower, and are currently the lowest since May 2013.

“The 10-year Treasury yield continued its free fall this week as global risks and expectations for the Fed’s June meeting drove investors to the safety of government bonds,” says Sean Becketti, Freddie Mac’s chief economist. “The 30-year mortgage rate responded by falling 6 basis points for the second straight week to 3.54 percent — yet another low for 2016. Wednesday’s Fed decision to once again stand pat on rates, as well as growing anticipation of the U.K.’s upcoming European Union referendum will make it difficult for Treasury yields and — more importantly — mortgage rates to substantially rise in the upcoming weeks.”

While it’s nice to see mortgage rates staying low, we have to remember that low rates come only because the Fed feels like the economy still needs a prop. This has been going on since the Great Recession started in 2008. We can’t root for low rates (aka a “weak economy”) forever.

If you’ve been putting off refinancing or buying a new home, don’t wait. Ping me and I’ll put you in touch with my favorite mortgage broker. Want to buy a new home, but don’t know where to start? Schedule a time to chat and we’ll talk strategy! Nothing gets me revved up like helping a family build wealth through smart real estate decisions. 😀

Fireworks start tonight in San Pedro! Get a full schedule at https://www.mysafela.org/fireworks-shows/.
Our Community Plan Update for Westchester & the Playas is in process in parallel with three other westside communities. Our Community Plan is the document that the Planning Department will use for at least the next 10 years to make planning decisions for our community. 🎯
It's not too late to register for the @wamblockparty cooking demo class today! It's a cook along! Pictured are the ingredients for one of three dishes being presented by the chef at the new @tomatkitchen in our own 90045. $15 for the class. We're meeting on Zoom today (Sunday) at 4:30 pm. Proceeds benefit @emersonavegarden. #living90045 😋🥰
Can you give a little love to @emersonavegarden this weekend? It's hard to have your biggest annual fundraiser online during a health pandemic. 🥰🌞 Help @wamblockparty meet its fundraising goals this weekend for our Community Garden. ❤❤
It's WAM Weekend! Help support our community garden, @emersonavegarden. Get the activity lineup at https://wamblockparty.org/activities #wamblockparty2020 #living90045
The first round of judging is in the can and now everybody is invited to vote for our grand prize winners. Vote now through Monday night to pick a community favorite from our #WestchesterChalkArt contest! Cast your vote at https://www.facebook.com/Living90045/posts/3807786532628170. #living90045 #westchesterca